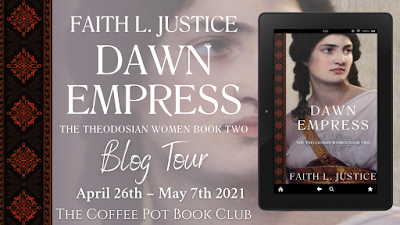 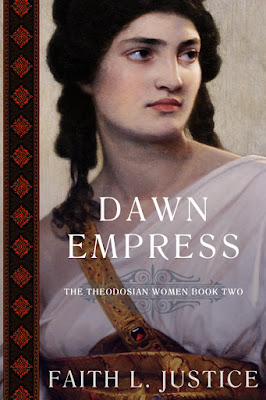 As Rome reels under barbarian assaults, a young girl must step up.

After the Emperor’s unexpected death, ambitious men eye the Eastern Roman throne occupied by seven-year-old Theodosius II. His older sister Pulcheria faces a stark choice: she must find allies and take control of the Eastern court or doom the imperial children to a life of obscurity—or worse. Beloved by the people and respected by the Church, Pulcheria forges her own path to power. Can her piety and steely will protect her brother from military assassins, heretic bishops, scheming eunuchs and—most insidious of all—a beautiful, intelligent bride? Or will she lose all in the trying?

Dawn Empress tells the little-known and remarkable story of Pulcheria Augusta, 5th century Empress of Eastern Rome. Her accomplishments rival those of Elizabeth I and Catherine the Great as she sets the stage for the dawn of the Byzantine Empire. Don’t miss this “gripping tale” (Kirkus Reviews); a “deftly written and impressively entertaining historical novel” (Midwest Book Reviews). Historical Novel Reviews calls Dawn Empress an “outstanding novel…highly recommended” and awarded it the coveted Editor’s Choice.

I can’t remember a time when a book so captured my attention that I lost all track of time and ended up being late for work! This novel is impossible to put down, the story so engrossing it felt like a crime to stop reading. It is a story so extraordinary and so masterfully told that the author, Faith L. Justice, really does deserve the highest of acclaim.

This novel is about Aelia Pulcheria. The story starts with the tragic death of her mother. Pulcheria is forced to view her mother’s corpse while listening to the rant of her father, who condemns her mother to Hell. The author then continues the story of Pulcheria’s life, and we become privy to how she views the world, we witness both her darkness and her light.

Influenced by the Church and obsessed with the failures of past rulers, Pulcheria does everything in her power to stop history from repeating itself. Her intellect and also her loving heart, her concern for the common people is masterfully portrayed. I thought Pulcheria’s depiction was absolutely brilliant, and it came across with a wonderful sense of realism.

This is an era that I know next to nothing about, but that really did not matter, for the author’s incredible storytelling skills and her ability to depict the historical era made this story almost effortless in the reading. But it was also quite educational, as it opened my eyes to this period in history.

Dawn Empress is a wonderfully insightful story about Pulcheria’s life and I must admit, I did need several tissues at the end of this novel. Pulcheria certainly achieved what she set out to achieve, and her people loved her.

I would recommend this book to anyone who enjoys quality, and well researched, historical fiction. 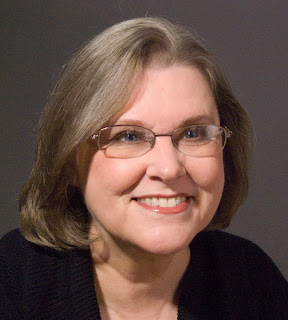 Faith L. Justice writes award-winning historical novels, short stories, and articles in Brooklyn, New York where she lives with her family and the requisite gaggle of cats. Her work has appeared in Salon.com, Writer’s Digest, The Copperfield Review, and many more publications. She is Chair of the New York City chapter of the Historical Novel Society, and Associate Editor for Space and Time Magazine. She co-founded a writer’s workshop many more years ago than she likes to admit. For fun, she digs in the dirt—her garden and various archaeological sites. 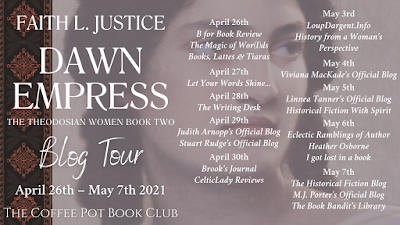 The Girl from Portofino (Girls of the Italian Resistance: A collection of standalone novels set in Italy during Worl... 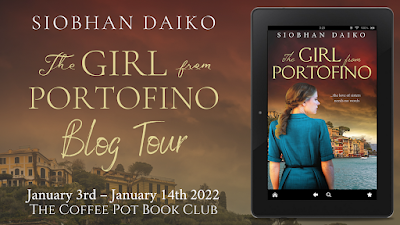